Notice: This is an informal description of the events. It has no legal standing.

The building that this NMR facility is housed in is undergoing a substantial renovation. The NMR Facility was not part of the renovation, but due to the maze of existing piping, plumbing, and wiring, work had to be done in the lab.

All electronic equipment was turned off, and easily removable equipment was removed. Consoles were covered with tarps. The magnets remained energized, and boxes were built around them, covering 3 sides and above. One side was left open to allow access for cryogen fills. 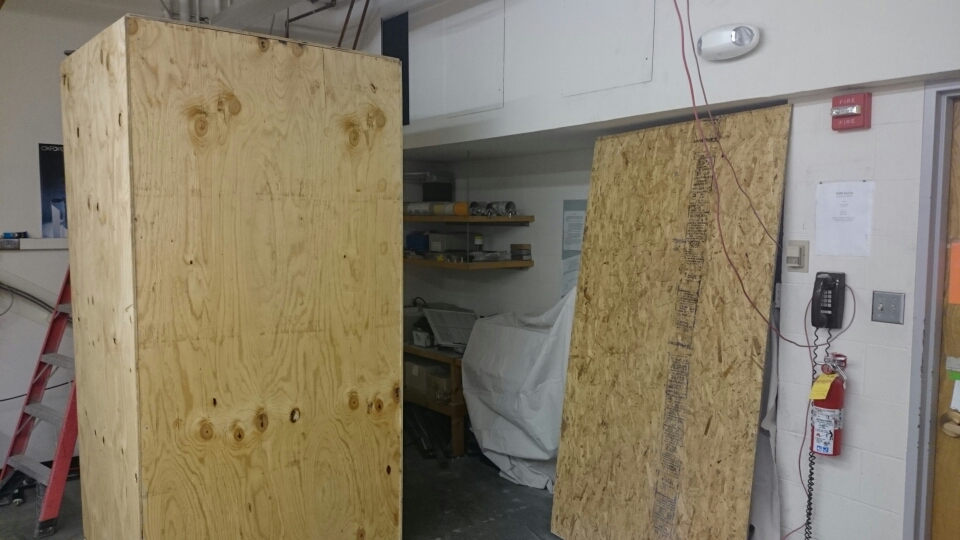 This shows the one of the boxes.

The foremen and the project managers were warned about the magnets and the magnet field of unshielded magnets. The magnet strength was demonstrated by having them hold a wrench and bring it near the magnet to feel the pull.

The work in the NMR lab included electrical conduits, drain pipes for the lab above, gas supply lines, and new ductwork. Several years ago, a dedicated split airconditioner was installed in the lab. The working fluid (not-Freon) line was run down the center of the lab to avoid the magnets. This meant that it had to be moved so that the new ductwork could run down the center of the lab. The new routing was along the back of the lab (behind the 500 (unshielded) magnet) and through the wall into utility space.

A worker on the fluid line walked around behind the 500 carrying a welding pack with nozzle and gas tanks. He held the unit on the side of his body away from the magnet and walked as far as possible (about 3 feet) away. The field grabbed the bottles, pulled them out of his hand, and under the magnet, striking the shim plate. The force on the bottles twisted his arm behind him, and then pulled the bottles out of his hand. No one was injured.

Several workers tried to remove the bottles, but they wouldn't budge. Then, the magnet started venting, and the bottles fell to the floor. The room was evacuated until the magnet stopped venting. 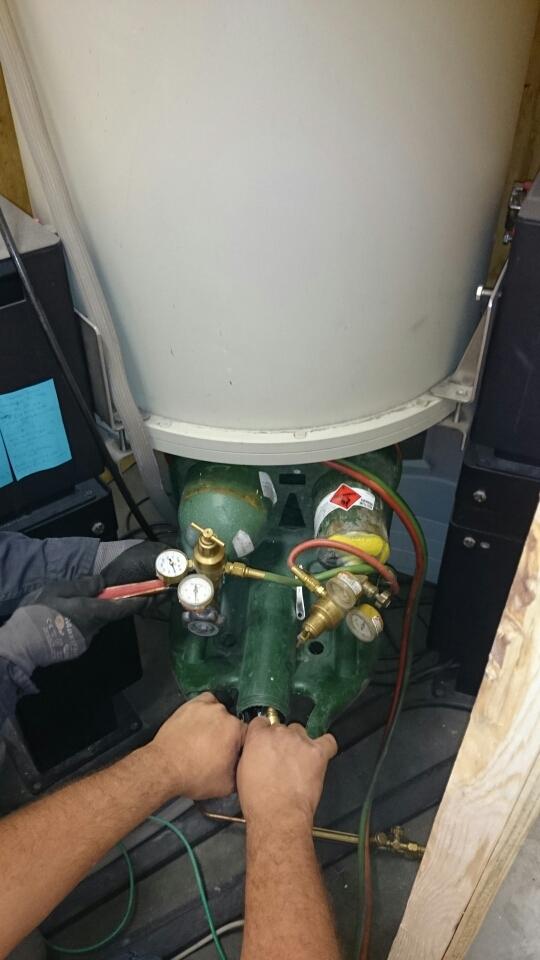 This shows the tanks under the magnet. 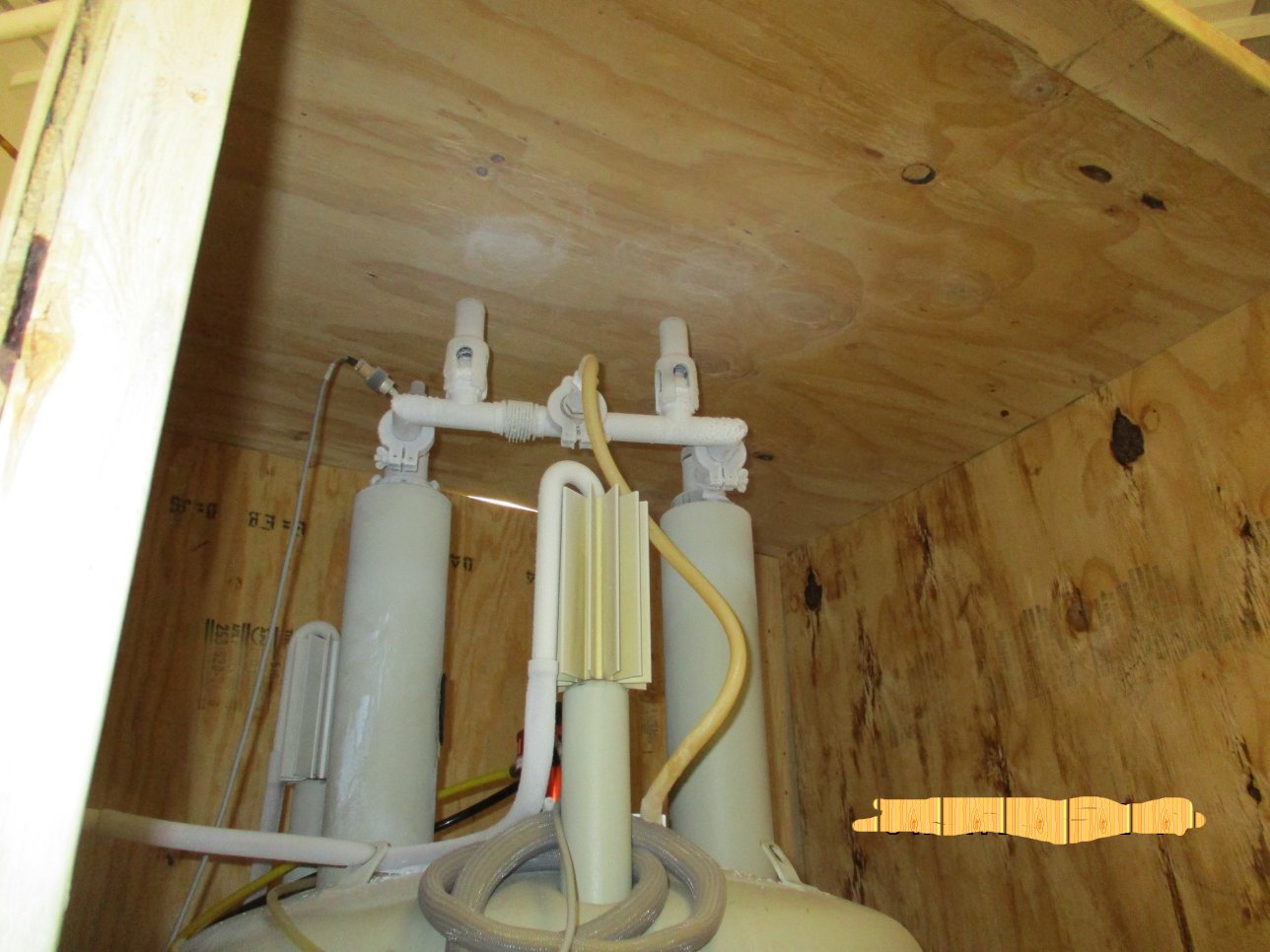 This shows the magnet venting (you can see the top of the box as well.)

The bottles hit the shim plate, and thus did not shear off the probe that was in the magnet. 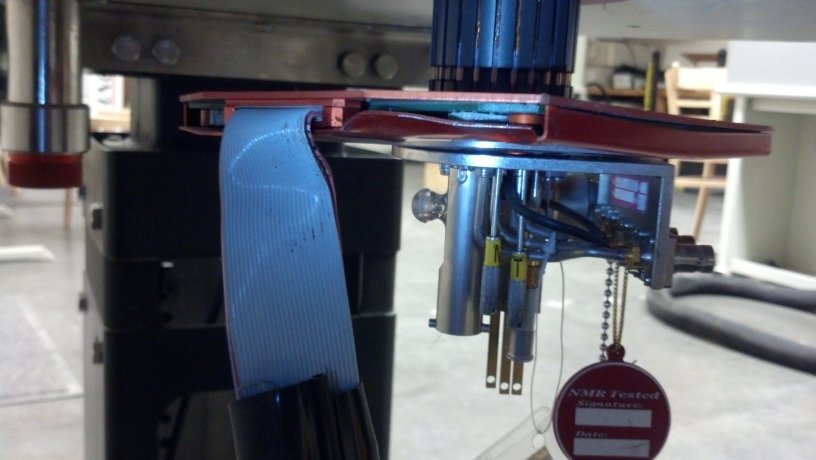 This tries to show the shim damage- the upper left side is bent. 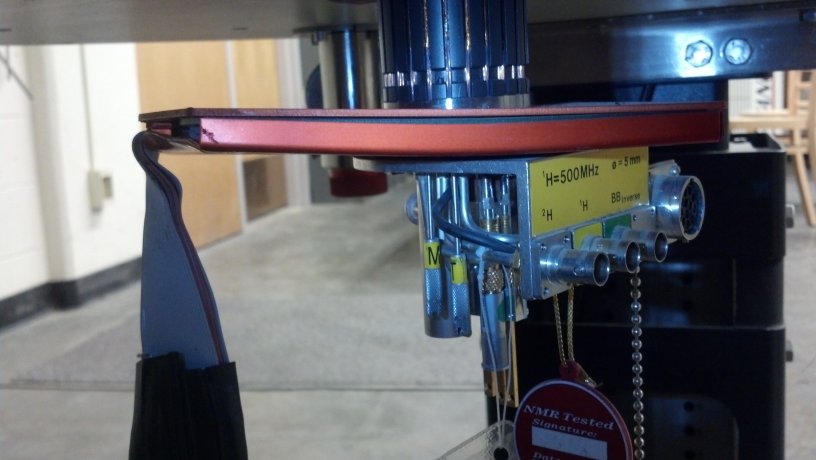 The extent of damage to the probe is unknown at this point- it hasn't been removed from the magnet because it won't move. At some point, we will get aggressive and remove it. The shims are a total loss.

A Bruker engineer was brought out to evaluate the system. The magnet was warm (no helium), but still has some vacuum (the drop-off plate is in place.). There are scratches on the base plate, including one across the magnet flange (potential vacuum issue). He opened the helium stack and found that the shorting plug was not where it was supposed to be. It was still inside- the quench pressure had not shot it out the top, but it was not centered. Probably the neck tube is bent.

Bruker's position is that the magnet is a total loss- it is unclear what internal damage was done, and there is no guarantee that it will ever be a magnet again.

We are currently dealing with insurance companies about replacing the magnet, shims, and probe and making the other probes and the console compatable.